Do the Santa Curtains really have to go?

Yes.  The answer you're thinking is yes.  And you're right.  It's January.  But I'm short.  And the kitchen curtains are tall.  Talllllll.  I mean, obviously they are not freakishly tall or abnormally tall. Or even slightly tall.  The windows in my kitchen are at a very normal height.  But I have to kick the kitchen step stool over to the sink and haul myself up on it and reach out and pull the curtain rod off the wall and slide the Santa curtain off.  Get the picture now?  So.  The curtains are tall.  Last week I found myself once again in the world's best local fabric shop, Sew to Speak, as you do when there are dishes to be washed and laundry to be folded, and frankly, anything else you are avoiding, to pick up the fabric that was destined to be my new kitchen curtains.  As it turns out, Kara, from me and elna, had also seen the same amazing Melody Miller Ruby Star Pyrex fabric, that showcases everyone's great aunt's pyrex dishes, and was having similar dreams of it covering her kitchen.  I volunteered to pick some up for her as well.  I thought I knew what I was doing.  The following is fifteen minutes of text messages (with various totally-inappropriate sections deleted in case her mom reads this) between Kara and I, while poor April tried to remain calm and not stab me with her scissors:

Me: Did you still want a yard of the beige pyrex?
Kara: You know that deer fabric you showed on IG? I'll take a yard of that.
Me: and the pyrex?
Kara: And a quarter yard of the white pyrex
Me: Yes ma'am
(I tell April what to cut)
Me: I think I'm going to use the blue pyrex to make kitchen curtains
Kara: I would totally do that!
Kara: But our kitchen doesn't have windows
Kara: Tell April I say heeeeeeeeeeeey, girl :)
Kara: Do you think two yards would be enough for four chairs?
Me: Wait, TWO yards?
Kara: It's like an off white, yeah?
Kara: Yep
Me: Yep??
(I text a photo of the white print)
Kara: 2.5 yards?
Me: Like a beige?
Kara: Perfecto
(I tell April to maybe stop cutting)
Me: I bet two yards would do it.  For normal chairs
Me: April is measuring their chairs
Kara: Does your name have an E?
Me: Nope
Kara: You two are great!!!
Kara: Alli?
(April asks if she still wants the deer?)
Me: Did you still want the deer?
Kara: That's what I thought
Me: wait, what?
Kara: humm...
Kara: 1/4 yard of deer, dear!
(Me to April: she wants 1/4 yd of deer, dear.  Haha.)
(April's mom laughs.  Kara is hi-larious)
Me: And 2.5 yards of white pyrex?
Kara: Will you show me the blue?
(Me to April: DON'T CUT THE WHITE! She's crazy.)
Kara: I love having a personal fabric shopper
(I text a photo of the blue print)
Kara: I THINK I WANT BLUE!!! (sometimes she types in all caps.)
Kara: Just 2 yards though
Me: ok, to be clear: 2 blue, 1/4 deer
Kara: Yes, dear
Kara: hehe
Kara: I'm sooooooo funny
Me: ok, cutting!
(I tell April, just cut it.)
(April cuts.)

I think I have finally met my attention-span match.  April might ban both of us from the shoppe.

So. A week, one yard of blue (but what I actually think is called "Aqua"), and some red bias tape later, that curtain was on its way.  Generally I end up with eleventy-billion big ideas, and 42 projects actually in-progress, and occasionally, I sit down and just finish one of them.   For the curtains, by far the worst part is pinning them.  And really, that's not too horrible. 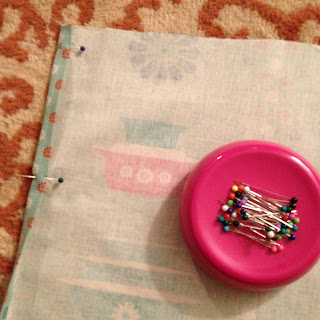 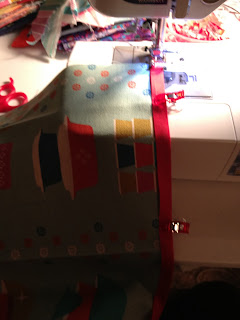 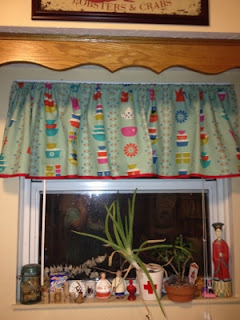 (I ought to clean the window sill off) (meh)

Start to finish, it takes probably less than 45 minutes to make new curtains. So you'd think I wouldn't have put the whole process off for so long.  The Santa curtain came down, and the new one went up, and my husband might not have noticed anything at all.  So that's one WIP down, 65 trillion to go.
Posted by Alli Evans at 11:21 PM