President Bush did a drive-by...

There is nothing like a field trip to a fabric store with ten other women to make my husband cringe make you want to sew.  We packed up the craft-mobile last weekend and headed to Waynesville, to meet up with fellow ohcraft-ers from Cincinnati (Kara has posted a much better description over on me and elna.)  But first, we had lunch, like crafters do.  The Hammel House Inn, which is, of course, haunted, is probably the best restaurant in downtown Waynesville.  And possibly the only restaurant in downtown Waynesville.  As the menu boasts, President Bush was scheduled to stop there in 2004.  Due to scheduling conflicts, he "did a drive-by."  As a New Yorker, I admit that the phrase "drive-by" is generally not something that you put on the cover of your menus, but I imagine this "drive-by" was in fact pretty uneventful. 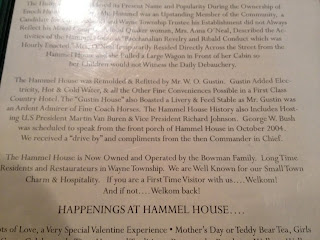 And then, behold the Fabric Shack.  Which should be called the Fabric Palace.  There was yardage to be had.  And lots of it.  But I was more excited about the company.  It has been a bit of a slow start meeting like-minded people in Columbus.  For much of the time that I've lived here, I've also lived out of suitcases, either travelling or living abroad for research, or sequestered in my parents' kitchen, writing (because I have the attention span, and therefore work ethic, of a three year old).  When I finished grad school last fall, I was very relieved to finally feel like I was living full-time in one place, and excited to finally begin putting down roots.  So, fast-forward to this weekend, and I found myself at a table with some of the most talented ladies you'll meet. 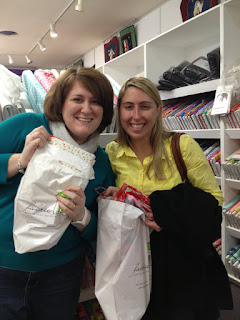 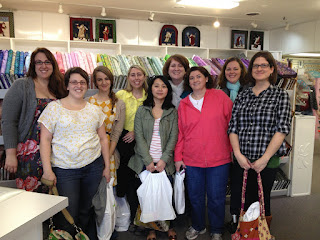 Its enough to make a quilter star-struck.  On the drive home, I admitted to feeling very small and un-crafty in such lofty company.  But I am grateful for the new friends, and the inspiration I came home with, and I am looking forward to our next meet-up, as I figure out what on earth I'm going to do when I grow up.
(It also seems that I somehow came home with two packs of Nancy Drew fabric...) 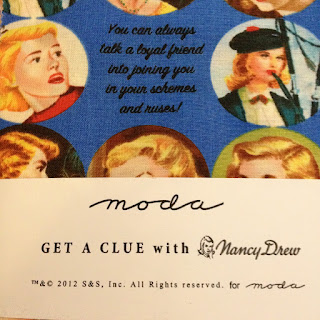